45 festivals recently pledged to achieve a 50:50 gender balance by 2022. I thought four years seemed like an awfully long time to sort this out, so I investigated how we got here in the first place, and what happens next.

When I tweeted this and attached some fake festival line-ups I’d made, showing two of the UK’s most notoriously male-centred festivals turned into all female ones, I was certain I’d rattle a few cages.

The responses fell into two distinct categories: those saying “I’d pay so much for this”, “This is better than the actual line-up”, and those saying “This is shit” and “No one would go”.

To the surprise of no one, the former category were mostly women and the latter mostly men. As a woman who has been heavily involved with music her whole life, it’s disappointing and frustrating to rarely see yourself represented on stage, especially when women are permanently in my headphones and the charts.

But the problem isn’t the lack of female acts in the genres Wireless and Reading & Leeds represent – hip-hop, grime, rock and indie. The whole point of my tweet was to demonstrate how many acts there are that could be booked, and if I can fill a line-up entirely with women, why can’t people who get paid to do this fill half of one?

Out of the ladies deemed headliner-worthy, Rihanna clocked up the highest number of headline appearances (4), followed by Florence and the Machine and Grace Jones (3 each). Even in genres like pop where female artists typically thrive, they aren’t getting booked in top slots at pop festivals, such as V Festival and T in the Park (note: TITP closed after 2016 and was replaced with TRNSMT).

So what’s the deal? Popular music researcher at Leeds University, Simon Warner, called it “sheer economics” in the BBC report, and noted that there are only a certain number of groups who can actually generate enough consumer interest to flog 80,000 tickets. Maybe labels just aren’t pushing their female acts enough to make them headline-ready?

Of the most popular headline acts, only four of them debuted in the last 15 years; Kasabian, The Killers, Arctic Monkeys and Kings of Leon, respectively. It’s clear British festivals are gagging for a fresh batch of headline-ready acts, so there’s no better time than now to get some gals in the top slots.

Obviously there are female acts that have graduated to headliner status in recent years, like Florence and the Machine and Paramore in the rock/indie field, and Nicki Minaj and Rihanna in the hip-hop/R&B pool, but it’s important to keep pushing more women to go further in the music industry, instead of just letting them drop off the radar to make way for the next token all-girl guitar band or female rapper.

I spoke to some new bands and artists to get an idea of what the bloody hell is going on, their struggles as women in a male-dominated industry and who they think should be headlining in the future. Is it all really down to demand and availability?

“It’s definitely not,” said riot grrrl band Peach Club. “It’s more to do with the fact that non-male bands are given less opportunities than male bands. There are so many amazing no-male acts and bands that are way more talented than your average white boy indie band that, because of their gender, aren’t given the light of day. It’s frustrating and unfair, because they have so much to offer but are never given that boost they need to make it into the mainstream.”

The girls, Katie, Rebecca, Charlie and Amanda, hailing from Norwich, have experienced their fair share of sexism on and off the festival circuit. They said “A lot of people don’t take us seriously because we’re young girls in a band, which is totally unfair because if you had a band of four or five 17-year-old boys they would be seen as ‘fresh’.”

“One thing we experience over and over is being asked ‘what is it like being a girl in a band?’ which is such a ridiculous question because we’re just like any other band. Multiple times we’ve had drunk men grabbing us after shows and being way too invasive when talking to us.

“We’ve also had multiple bands that we’ve played with be patronising towards us (actually, one experience lead to ‘Mission Impossible‘ being written) which is nothing but counterproductive because they’re all supposed to be part of the punk scene which is about empowerment, yet talk down to us because we’re women. It never stops us though, just drives us more to prove that we’re just as worthy.”

They also introduced me to some all-female festivals currently popping up in the UK. “There already are all non-male festivals! One that stands out to us is Loud Women fest, which is a festival all for female and non-male bands in London. The reason these festivals aren’t more prominent is because they’re usually DIY festivals and don’t have a huge amount of funding so it’s difficult to book larger acts, but it’s a really good way for smaller bands to get that stage they need.”

Canadian singer-songwriter Haley Blais built her career on the internet, and has a pretty different experience to the acts who grew up gigging. “Luckily, I have yet to experience the inevitable, since I’m just coming into the scene; having to deal with venues and bookers, etc – but I know it’s there. I operated strictly through the internet for so long, and could just delete the misogynistic losers, but you can’t do that in real life. Actually, can we make that happen?”

She, like most of us, can’t get her head around why there are so few women playing festivals. “It doesn’t quite compute. Off the top of my head I could currently name 20 touring female acts over male, established and new. Maybe more. Female artists are quite truly killing it right now, I think they’re at the core of the best music in the last few years that’s just SCIENCE. It’s almost overwhelming how many bands are astounding me and there’s no excuse. So, yeah it’s corporate bullshit.”

The 50:50 pledge was proposed by PRS, and is titled “Keychange”. It’s an international campaign dedicated to empowering women and investing in female talent, and is supported by the Creative Europe programme of the EU. The 2022 goal was established as a five-year framework for change, as the campaign was started in 2017. When you consider that only 26% of festival lineups are female acts, the target is exactly what they say it is – “ambitious but achievable”.

Listen, I don’t have all the answers, but I do know this problem runs much deeper than just who’s on the bill. Most festivals in the UK are run by blokes – Glasto and Emily Eavis aside – and Melvin Benn, owner of Festival Republic (the company that runs Reading & Leeds, Wireless, Download, Latitude, Electric Picnic and Lollapalooza), has rejected the 50:50 pledge, so as you can tell we’re off to a great start. It’s a much wider industry problem that deserves its own investigation. In the meantime, I guess all we can do is check back in 2022 to see if anything’s improved. Oh, and support all the female artists you can, of course. 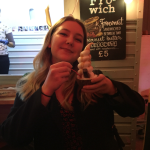