A lot of things have changed since Mamma Mia: The Movie was released ten years ago – the death of Michael Jackson, the evolution of Twitter, and of course, Brexit? – but my dream of abandoning everything I know, packing up and moving to Greece to run a hotel and sing my heart out… yeah, that definitely hasn’t changed.

I wasn’t among the many begging for a Mamma Mia sequel, and I certainly wouldn’t be at the midnight release with an ABBA t-shirt and blow-up microphone, but any opportunity to see a ridiculously over-the-top, feel-good film is certainly going to be on my to-do list.

There’s approximately zero members of the population that dislike ABBA, and – if possible – even fewer who can resist belting their heart out when you put on Dancing Queen. So even watching the film with your eyes closed is likely to satisfy your hunger for a cheesy hit. However, if you’re considering re-watching the original again before you dance your way into the sequel, I’d definitely say don’t. Trust me.

There are very few ways to top Meryl Streep running around on rooftops, hiding from her ex-lovers and singing Mamma Mia! Certainly nothing in the sequel triumphs the original. No, not even casting Cher. Seriously, why was Cher there?

Sure – the songs, the enticing cinematography of Greece, the enviously stylish outfits and carefree table dancing is all still there, but the film doesn’t quite have the edge over the original.

The inferior song choice mixed with a questionably long storyline and a dash of… Cher? isn’t really the recipe to cook up a sweeter film. Don’t get me wrong – it’s ABBA, and it’s frolicking around Greece – it’s wonderful, but the bar was set a tad too high by the original movie. It had a lot to live up to.

If you’re after a thrilling, enticing and original storyline – this film isn’t for you. However, it never promises to be more that a feel-good, bloody cheesy chick flick. So if that’s what you’re after, take it with a pinch of salt, grab some popcorn and enjoy it for what it is. 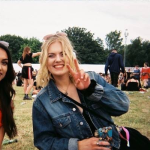